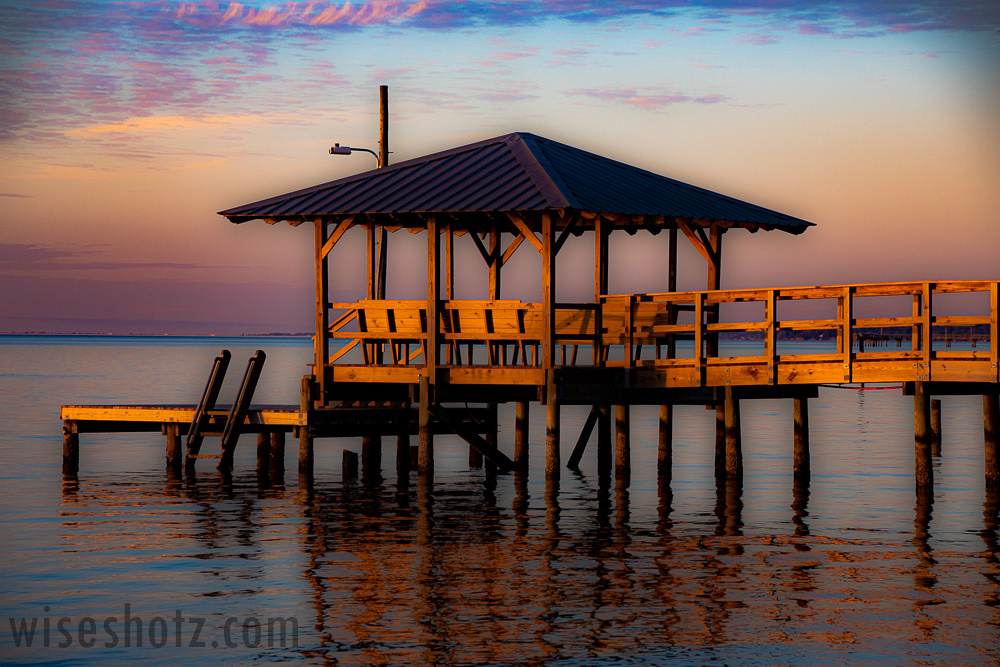 If you’ve followed my postings on Facebook and/or perused my website offerings, you’ve likely surmised that the Orange Street Pier is one of my favorite photo subjects here in Fairhope. I’m often asked, “why so many shots of that pier?”. The flippant response would be, “I like it”. And, I do! The reality, for me though, is that the O.S.P. is reflective of an essence and aura of times past as well as one where memories are still made and cherished. I’ve received tons of comments and notes over the years in response to my different shots of that scene. Comments such as, “…he proposed to me there”, “…caught my first fish from that dock”, “…was my wife’s favorite spot”. I had the meaning of that pier hit closer to home recently with a response from a nephew.

One of my sisters and her family moved away from the area several years ago, bopping through Georgia and Louisiana before ending up in Houston. As my mother lives here in Fairhope, they’ve visited often over the years with her kids taking advantage of the bay and Fairhope’s offerings. Upon Forrest’s high school graduation, I had a shot of the O.S.P. printed and framed for him. My sister told me that when he opened it, he was surprised and emotional, saying how much it took him back to the days he fished from the dock both by himself and with his uncles. He even carted it away to college to hang in his dorm.

My heart is warmed when my photos elicit treasured memories and I always appreciate hearing the stories around them. Still, though, I love viewing the scene that includes the pier and it seems that every time I’m there, it appears new with some previously unnoticed detail now enhanced in some way. It could be the blacks and whites made more obvious by the early morning fog: the golden hue of the wood as reflected by the setting southwest sun: the weathered wood walkway contrasting with an ominous sky: a perfect silhouette accompanied by a perfect sunset! It never ceases to surprise me what I find there when I look through my lens.

On my website, I have a portfolio folder with nothing but shots of the O.S.P. and I probably have a few hundred in a file on my computer. See, sometimes when I take a shot, I just know, I can sense that there is something special, something different about the scene that doesn’t jump right out. I file those away in a special place and from time-to-time, I go through them, looking at each shot to see what I didn’t see before, but sensed. I’ve pulled some pretty awesome  photos out of that ‘special place’, including the one accompanying this blog entry.  When I come across one of these gems, I process it and share, both on Facebook as well as my website. And, who knows? That gem might just stir a memory for someone and put a smile on their face. I’ve seen firsthand that a photo and a memory can be a lot more valuable than a gift-card.

Wiseshotz Photography
You're quite welcome, Nancy! And thank you for sharing a bit about what the pier means to you. I was there a bit last evening and seeing and hearing the kids on and around it made me smile. Memories in the making!
Nancy Ramsey(non-registered)
I couldn’t agree more about photos along with their memories can be one of the best “gifts” for a special someone. For many locals to this area, that pier does indeed bring a memory to one’s mind. I used to live on Orange Avenue and took many a walk to that pier with two of my favorite “fur” companions ~ Jewel and Moses. Aw, yes, the memories are there and in my heart as well. Thank you for your “gift” to all with past, present, and future memories.
Wiseshotz Photography
You're so welcome, Louise! Thank you for following my work.
Louise(non-registered)
I absolutely love your photos of my favorite place on earth. Thank you for sharing your love of O.S.P., always warms my soul.
No comments posted.
Loading...
Subscribe
RSS
Recent Posts
HOT PIXELS HOUSE LIGHTS UP! The Calm SPRINGSTEEN Spring Clean Cigarettes & Rabies! SERENITY Glass Half Full Kenny Stabler A Happy Ending
Keywords
Fairhope Alabama wiseshotz Mobile Bay pentax #zenfolio pier memories Mobile Fairhope Avenue
Archive
January February March April May June July August September October November December
© Wiseshotz Photography
Powered by ZENFOLIO User Agreement
Cancel
Continue