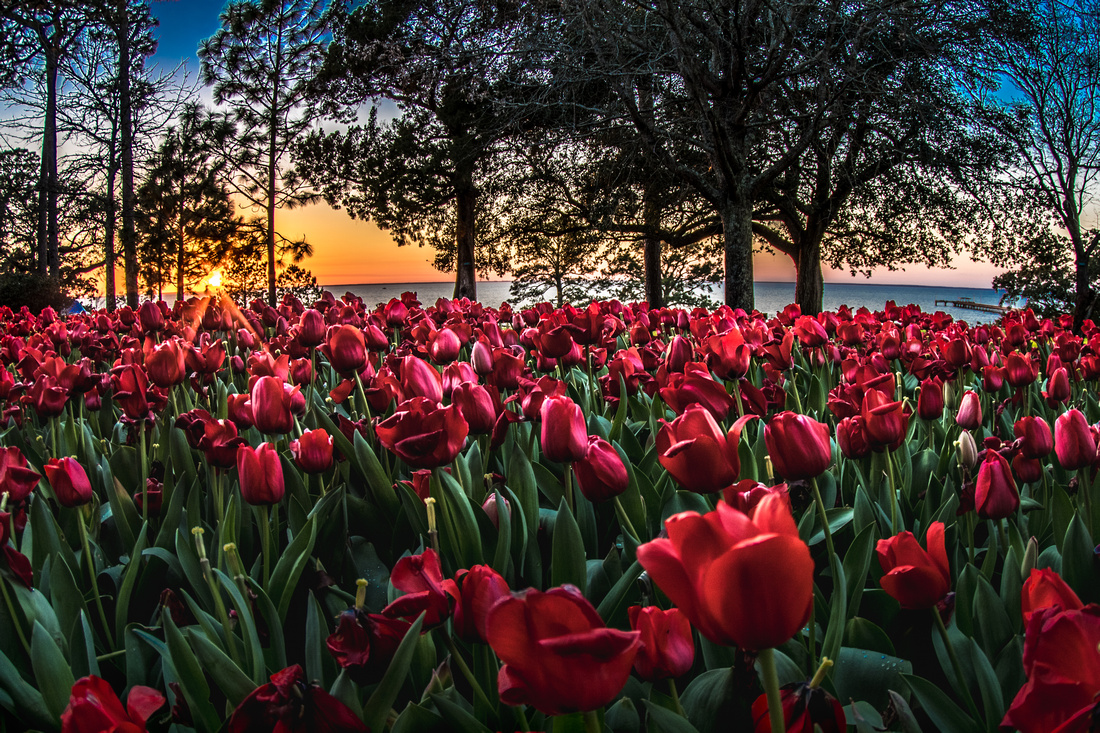 A client recently ordered a print of these Tulips on the Bluff and while submitting the photo to my printer, I recalled when I actually took the shot. I captured this scene a few years back on the tail-end of a Spring day. Back then, I was driving an older Miata and I only mention that because it was so low to the ground, it offered me a view somewhat different than usual. It had been a rainy week and, as you can see from the shot, it was one of those glorious spring days after the storms had passed, seemingly cleaning the skies and leaving behind a fresh and vibrant aura. I was driving down Fairhope Avenue with the top down and turned onto Scenic 98, most likely heading toward my mother’s house. I glanced out to my right and knew right away that I had to capture the unfolding scene. It just seemed so perfect, especially as I envisioned the shot. I pulled into the Thyme restaurant parking and grabbed my cam. Luckily, I had a wide-angle lens with me, which would enable capturing all the beauty I had glimpsed. As I headed across 98 and a bit north to line up the shot, I realized that I had to get low to get the shot. Without realizing what I was doing or where, I went to my knees, shuffling left and right to line things up. Later, my sister would tell me that she saw me kneeling in the street as she was driving home. It wasn’t until after I captured the shots that I found I’d been on my knees in a big puddle of water.

Yep, shoes and jeans wet and covered in mud. But, hey, I got the shot! And, that’s something I’m kind of known for, going after the shot that others might shy away from. My zeal has certainly put me in some awkward places and has sometimes inconvenienced others. I travel a lot for work, more often than not going on fly and drive trips. The drives could just entail a short hop across town to a local facility or up to a several hour excursion out to rural areas. This other picture of me traipsing through the long green growth is one of those long drives to a site on Oahu. I don’t even remember the shot, but, as I’m known to do, I just pulled the car over and headed off. I probably left four or five of my cohorts sitting in the car, wondering ‘what now?’. They are mostly good natured about it though – one of them took this shot as proof of my derangement.

For me, getting the shot is part of the fun, and I do enjoy photography and all that it involves. So whether I have to get a bit wet and dirty, chased out of a field by a farmer or go beyond barriers meant to keep me out, if the scene is worth capturing, I’m at least gonna try. And, I've found that to be the case in all of my life's endeavors - if it's worth having, whether that be a spiritual goal or any other aspect of my interaction with this world, I'm gonna try and never give up!