As I was driving along Section the other evening, I noticed this powerboat motoring into the Fly Creek marina and I really felt the need to capture the scene. When I first saw the boat it was just passing the breakwater, entering the protected mooring area. By the time I stopped the car, pulled out my camera and lined up the shot, I’d almost missed the boat, so to speak. But, such as it was, I got the shot. In and of itself, it’s not all that. There’s a bit of good color, early evening light and nice reflections, but the timing wasn’t great and my angle for composition was not what I’d like. But, as I was taking the photo, something inside stirred, a memory, perhaps. As I was processing the photo, I reflected on how marinas always remind me of my father, him having been an avid sailor from way back, and the powerboat just kind of sealed it as he detested boats with motors that did more than putt, putt along. Then, a memory popped into my mind, one which I hadn’t visited in years, of a time in my youth when my father, my sister and me set out on a summer adventure.

The dates are somewhat unclear at this point, but mostly not relevant other than to pinpoint our ages. It was either July of 73 or 74 when, as I found out much later in life, Walter senior became so frustrated with the goings on at his business, he decided to strike out for points west with the intention of chucking it all. At the time, as far as my mother, sister and myself knew, he was just taking the two of us on a summer trip. That in itself was out of the ordinary considering he told us we would be gone for a month and it was something we'd never before done. We really knew something was up when he bought a big Econoline passenger van and a pop-up trailer. I think the closest my dad had been to camping was on overnight sailing trips and his boats were always appointed with the comforts of home. And the van, wow. Dad was driving a BMW at the time, had driven Volvos previously and even had a Morgan built and shipped over from the UK. But then, this was the 70’s and his lifestyle was somewhat a reflection of the times. He had let his hair grow to his collar and sported mutton chops and a big ole walrus mustache. So this could have been his attempt to seek a simpler life. Whatever his intentions were, that’s how we set out, driving west in the van and popping up the camper at KOA’s at the end of each day.

Now, this trip took place almost 40 years ago and a lot of details are quite fuzzy. I do though, remember quite a bit. Dad brought along a new-fangled cooler that plugged into the cigarette lighter and he had stocked all sorts of goodies for sandwiches on Pollman’s bread for as long as that lasted. My sis or I would put lunch together and we would eat as Dad drove. I remember that I had a little girlfriend at home and would feed change into a payphone each night to chat with her about things kids that age chat about. Where I obtained the seemingly non-ending supply of change escapes me and I don’t really remember for how many days the calls continued. I know that I missed her – my first romance and all – but we were in uncharted territory on this adventure and that eased the sting of separation.

Our first non-KOA stop was in Lubbock, TX at the home of dad’s brother and his family. We spent a couple of days there, dad catching up with Uncle Syd, sis and I spending time with our cousins. Then we were off and it is, in all honestly, a blur until we got to San Francisco. Dad had an ex-business partner who lived in the city, so we stayed with him and ventured out to see the sights – riding streetcars, traipsing up and down Lombard Street, exploring Fisherman’s Wharf, dining at the legendary Kan’s restaurant in Chinatown and Jack’s downtown on Sacramento. Funny, as good as those places were and no matter where we had been each evening, we stopped and had a snack at a neighborhood Mexican restaurant. There were a whole lot of ‘firsts’ on that trip, for sure, especially for a couple of Mobile kids.

From there we headed to Napa and toured the ‘BV’ winery, of which dad was a fan. Then, it was over to HWY 1 and up the coast with all of the majestic scenery that still amazes me whenever I’m out west. We drove north and took HWY 101 as far as we could, until we changed our route to hit the Canadian border. I remember dad trying to declare a pistol. Imagine trying that today! Fortunately, there were lockers at a business nearby that you could rent for such things. We took a ferry to Victoria and I remember it seemed as if a city had been secreted away at Disney World. It was the cleanest place I had ever experienced and the shops reminded me of Main Street. The Empress Hotel was mind-blowing for us southerners and the people who lived and worked there were the nicest and most helpful I’d ever encountered. And, trusting! Dad found a hand-made leather briefcase and, as I remember, it was pricy, several hundred dollars. The shop didn’t accept credit cards but told pops they’d gladly take a check. Different times, for sure.

We didn’t know it then, but, we’d just about reached the pinnacle of our trip. Distant cousins on Dad’s side lived in Vancouver and we headed there for my sis and I to meet them and spend a bit of time. They lived in a somewhat rural area and one evening, sis and I hopped on a couple of bikes and headed out for a ride. Now, I had gotten my hands on some Canadian cigarettes and was darn sure going to take this opportunity to try em out. I separated myself from my sis, acting like the little twit I was, and went off and smoked till I could smoke no more. Apparently I had been gone a while as a lot had transpired at the cousins place. When I got back, sis was already there and everyone was fussing over her. Seems that after I ditched her, she had an encounter with someone’s pet dog and received a bite on the leg. She made her way back to the house in a panic and after our cousins attended to the wound, my father put her in the van and set off to go speak with the dog owner. This next part is unclear, even to my sister’s memory. The owner could not produce the animal. No one knows if they may have witnessed the attack and then spirited the animal away or if it had run off. We did find out the next day that they had euthanized the pet and had the body destroyed. Nice, huh? And, by doing so, there was no way to determine if rabies was involved. Unfortunately, the normal protocol in the U.S. in a case such as this was to begin treatment for rabies which was a series of very painful injections in the abdomen. My father was not gung-ho about putting her through it, but his concern for her health was tilting the scale.

The next couple of days were tense. Sis was beside herself, dreading the possibility of the excruciating treatment. Dad seemed to be on the phone constantly, speaking with physicians at home and in Canada, my mother and stepfather as well as some research institutions on both sides of the border. He learned that rabies was exceedingly rare in Vancouver – there had not been a reported case of an animal infection, much less one in a human, in something like 20 years. So, after much discussion, nail-biting and what had to be an astronomical long-distance bill, it was decided that the odds were in sis’ favor – very, very unlikely that rabies was involved and the treatment was not recommended. Needless to say, we were all relieved and happy for sis. Course, she was over the top in her elation. I was as well – sure didn’t want to see sis have to go through the ordeal of the treatment. Never mind the guilt I was already feeling for abandoning her. Who knows if it would have worked out differently if I hadn’t. Still, I felt somewhat responsible. Strange thing is, with all of the attention to and hand-wringing going on over sis, there was nothing much said about my behavior. Didn’t really feel proud of that at all. Still, it looked like everything was going to be okay.

And, once the decision had been made about sis, mom being mom, the trip was cut short as she demanded we be delivered home asap! So off we went – no more KOA campgrounds, no leisurely drives to see the sights, no visits to friends or family. It was interstate highways and Holiday Inns from Vancouver to Mobile. Still, it was a great trip – we had memories to hold and stories to tell. I believe the three of us grew a bit closer to each other through it all and it was an epic trip for a couple of Mobile kids and their dad. And dad, he kept his office open for another 10, remarried and once us kids moved away, he did the same. Funny, Dad and I ended up back here where we started having spent 20 years elsewhere. He has since passed. Living here near the bay where he sailed so often and scenes such as the one in this photo keep the memories alive. 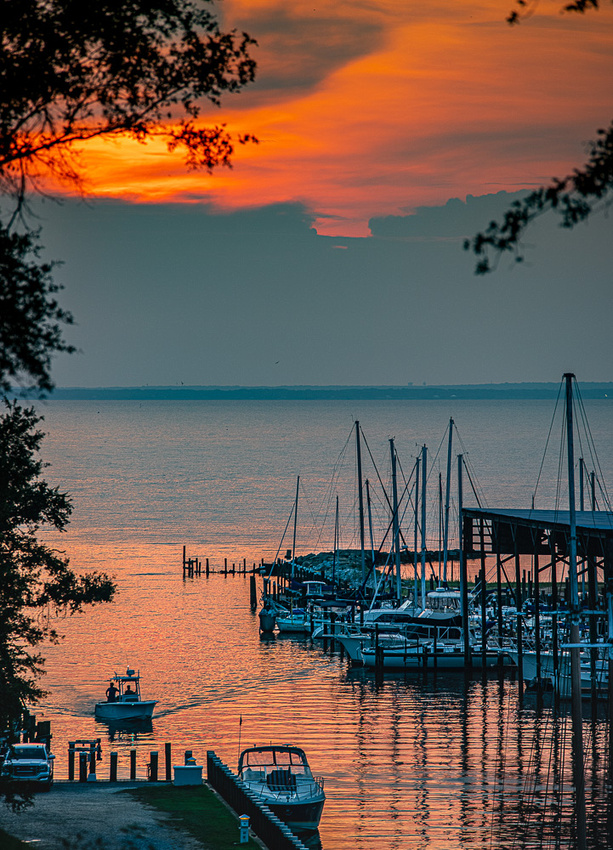 What A Day!Home To Fly Creek

John W(non-registered)
I'm from a family of 10 and your story reminded me of the crazy trips we all took as a family. The trundle seat in the back - looking backwards. My mother at one point let the seats down and placed a mattress to lay us all out on. Way before the days of seatbelt safety for sure. Thanks for your story... really enjoyed it.
Anita Kathleen Kastorff(non-registered)
Not a thing wrong with that angle. Its lovely and serene as all your shots are. The colors are vibrant but restful. My dad also used to sail his catamaran in the bay at Fairhope. But not for long. He died at age 49 in Coden where he lived. Seeing Fly Creek Marina is bittersweet for me. It was the last place my son and I played together before he died. Life is fleeting. Thank you for the picture.
No comments posted.
Loading...
Subscribe
RSS
Recent Posts
HOT PIXELS HOUSE LIGHTS UP! The Calm SPRINGSTEEN Spring Clean Cigarettes & Rabies! SERENITY Glass Half Full Kenny Stabler A Happy Ending
Keywords
Fairhope Alabama wiseshotz Mobile Bay pentax #zenfolio pier memories Mobile Fairhope Avenue
Archive
January February March April May June July August September October November December
© Wiseshotz Photography
Powered by ZENFOLIO User Agreement
Cancel
Continue