After having spent the better part of the last two weeks working at Girard Medical Center in Kansas, I was looking forward to a weekend at home without the need to do laundry and pack for another early Monday morning flight. Saturday certainly started and ended well, providing much needed time for errands and chores, exercise and a nice visit with my mother. Early afternoon, I set out for one of my weekend walks, leaving from the condo, heading to town, the bay and beyond. The weather looked fine and I didn’t see anything in the forecast that should deter me.

I had been trekking along for almost two hours and was headed back north on scenic 98 when the weather took a turn and the raindrops started to fall.  As you may have read in one of my other blog entries, I’m no stranger to pushing through the rain and this time was no different. By the time I reached downtown, the torrent had eased up, but, it rained the whole way back to Volanta. Still, it was a good walk and it felt great to get out and move around.

It rained on and off for a bit as I got some things done at home as well as out and about. Finally, it stopped around my abode and I put the cam in the car and headed out to see what may develop. I checked out haunts from North Beach to the Grand Hotel and noticed that the sky looked promising for a nice sunset. I first ended up around the fishing pier by the covered pavilion there on the Fairhope beach. There were not many folks out and I spent some time just watching fishermen and wildlife, biding time until the sun started bedding down. But then, around 7:30, it seemed as if an alarm had gone off to alert people that it was sunset time. Seriously, it was like a parade with folks on foot, bikes, in cars, all traipsing to the waterfront. In the space of 10 minutes I’d bet that 50 or so people showed up along the stretch of beach from the pavilion to the big pier. I guess they were just ready to get out after the rainy day. But, it was too much for me.

I headed back toward Orange Street and pulled into the Pier Street boat ramp area. There were quite a few folks there as well, but, I was scoping out a vantage point from the vacant lot seawall just north of the ramps. The wall itself is a very handy spot for setting down the cam and getting a good shot closer to the bay level, pointing somewhat up to include the sky. Even though the sunset was hidden by the clouds, I really like how this shot turned out. It reminds me that the storms we endure, both as part of our weather here in lower Bama and as the tumultuous times in our lives, all come to an end. For me, I always visualize the other side of the darkness, the life sustaining sunshine, because I know things will work out as they should and for the best. My faith and my beliefs allow for nothing else! 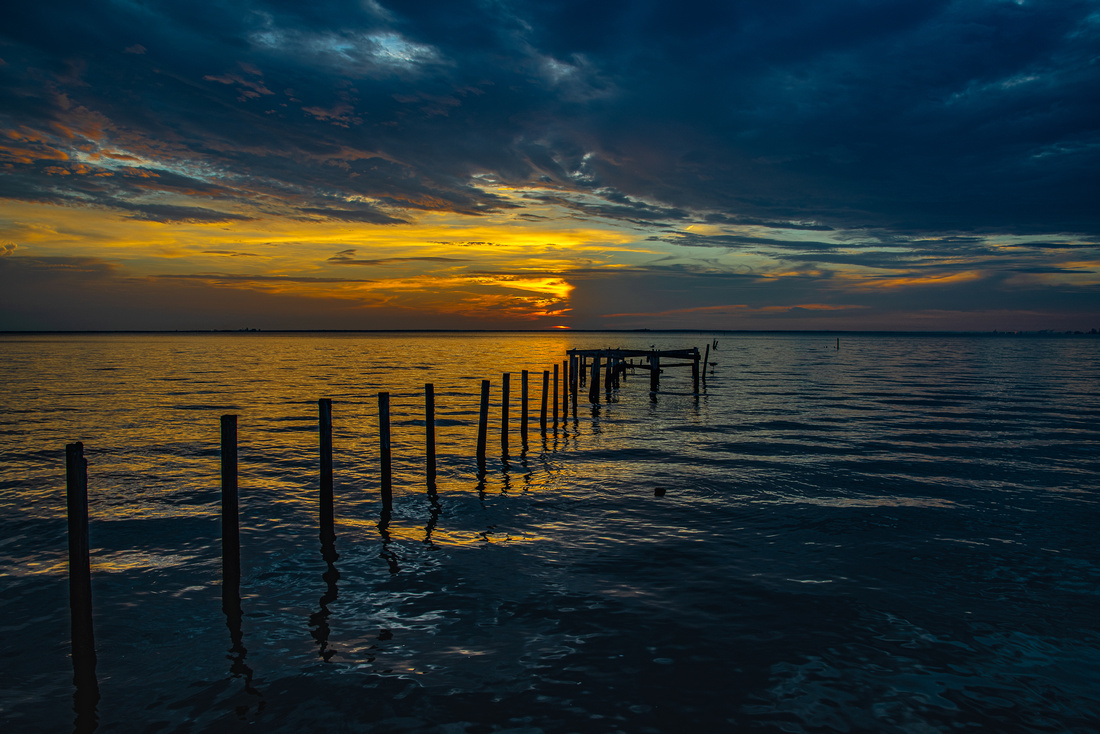